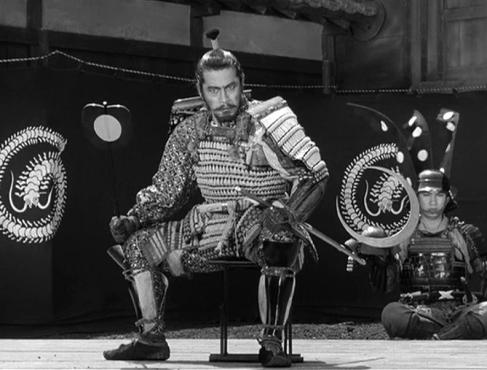 As it turned out, making a throne out of blood wasn’t really feasible  so he had to make do with a stool.

Throne of Blood is a black and white Japanese film adaptation of Shakespeare’s Macbeth, brought to life by critic’s favourite Akira Kurosawa (he also directed Seven Samurai).The film transfers the setting from 16th century Scotland to that of feudal Japan; replace swords with katanas, knights with samurai and ale with rice wine and you’re pretty much there. Largely regarded as the most successful screen adaptation of ‘The Scottish Play’ (despite some narrative liberties), Throne of Blood was filmed using full scale sets -including a couple of castles- on the blackened slopes of Mt. Fuji.

Throne of Blood’s plot will be no secret to anyone familiar with the source material, but here’s an outline: Generals Washizu (Macbeth) and Miki (Banquo) achieve glorious victory over the overwhelming forces of Inui’s troops. On their way back to Cob Web castle they encounter an elemental, cackling spirit (Just one instead of the three) who goes on to predict their future; Washizu will inherit North Mansion, and eventually replace Lord Tsuzuki (King Duncan) as ruler or Cob Web castle, while Miki’s son shall eventually take over from Washizu as the castle’s heir. Upon returning home, Tsuzuki grants them both with promotion. Washizu claims to be content, but when his wife Lady Asaji hears of the prediction she manipulates him to murder and usurp Tsuzuki. As in Macbeth, Washizu’s machinations soon come crashing down around him. 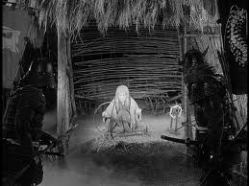 First of all, the performances in Throne of Blood are incredibly physical. Actors spring to their feet, jump halfway across rooms and flourish spear and sword with remarkable energy and theatricality. Toshiro Mifune is brilliant as Washizu- his furrowed brow and booming voice pin you to your sit. Actress Isuzu Yamada has an exceptionally menacing take on Lady Macbeth, shuffling around and poisoning Washizu with her foul speech –the inside of her mouth is literally painted black. Even when the turmoil of Washizu is at its peak there is humour to be found; after his sake fuelled hallucinatory rage, Lady Asaji apologises to the guests for his behaviour, at which point they solemnly file out of the room…except for one feast goer, who fails to take the hint and plonks himself down for another swig from his mug. 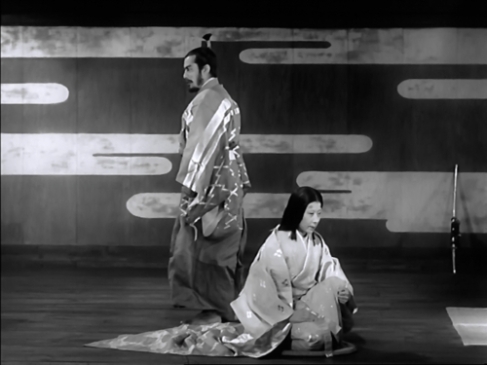 Throne of Blood’s score has an eerie quality, complemented by the vivid sounds of creaking doors, thudding arrows and storm swept forests. Everything feels genuine, probably because it all was; one of the cast was scarred for life when a samurai sword pierced his protective armour and Washizu’s demise  – a contender for best death scene ever- was choreographed by master archers, using genuine arrows.

Throne of Blood is absolutely brilliant and watching it on a cinema screen was an immense pleasure. It has also made me very excited to watch Kurosawa’s other work; Rashomon and Seven Samurai here I come. 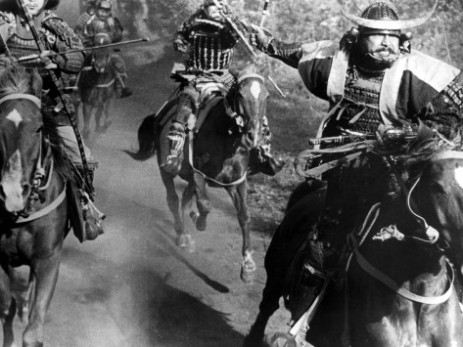