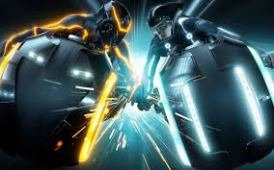 Whether the cheese fest that is 1982’s Tron needed a sequel is debatable, but it nevertheless got one (albeit 28 years after the event), and since I watched them both back to back, I’d thought I’d write about/compare the two. If human versions of all the world’s computer programs really did exist in some kind of virtual reality it would be fascinating to see what kind of societal developments took place; would all the paedophile-ring sites become digital-outcasts, getting bummed and shivved by the spyware thugs? Norton and McAfee, fraudsters and extortionists that they are, would probably fight over the cyber-streets for the rights to run protection rackets on the little guys. Anyway…

In 1982’s cult geek extravaganza Tron, computer programs exist in another dimension known as The Grid. The inhabitants of this high-tech realm are humanoid incarnations of computer programs, who look like spandex wrapped versions of their creators. Kevin Flynn (Jeff Bridges) is one such programmer who inadvertently ends up inside The Grid and is tasked with bringing down the tyrannical Master CPU, who has the whole place on lockdown and hosts gladiatorial games to dispatch of unruly or defunct operation systems.

Tron’s concept is an interesting one; what if computers could exist in an alternative universe, and what if a human got in? Unfortunately it’s poorly executed and badly acted to boot. The tone of could have been a little more in line with The Grid itself, which is so perfectly ordered and satisfyingly simple. Instead, Tron often feels like a nerd’s reimagining of a Logan’s Run dystopia, occasionally drifting into the grand arena of camp, like Death Race:2000 but without the laughs.

Tron: Legacy is a super-sleek, big- budget- blowout revisiting of The Grid universe which pits Sam Flynn (son of Tron hero Kevin) against the corrupt shareholders of his father’s company as well as a  reign of terror taking place in the virtual world. All the while, Sam is desperate to uncover the truth about his father’s disappearance when he was just a wee lad; their powerful bond is demonstrated through flashback and a heavily CGI’d Jeff Bridges, looking like Ryan Gosling out of Drive when he wears that silicone mask.

Legacy is smarter than its predecessor and beautiful to behold, all shiny chrome space ships and electro-minimalist highways.  It also comes with a popping beat-driven soundtrack courtesy of Daft Punk, which was widely touted as the best original score of 2010 (though it was Trent Reznor who bagged the Oscar for The Social Network, and quite rightly too). A better cast also goes some way to making this a more bearable watch than the original. Jeff Bridges is back, chilled as always, while Michael Sheen gets to go Liberace style as a nefarious neon nightclub owner. On the other hand Garrett Hedlund’s casting as protagonist Sam is, quite frankly, piss poor.  His delivery of tough guy lines such as ‘You wanna play?’ are a cringe inducing embarrassment and his expression of grief looks more like his ‘reaching behind the scrotum to get that persistent itch’ face.  Olivia Wilde is also in Tron: Legacy. She acts. She’s good. She wears a cat suit. 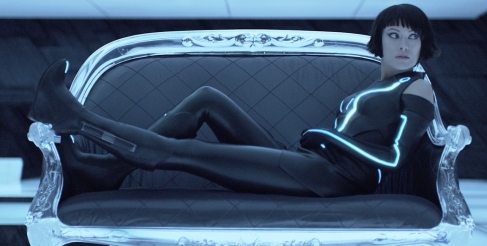 Tron: Legacy is conducted as something of a tribute to Tron, with the reveals of ‘icons’ like Flynn’s Arcade and the Carrier ships announced with such fanfare and reverence that it detracts from the film as a whole. The first Tron wasn’t exactly great, and to describe it as iconic would be a holo-bridge too far. Tron:Legacy is an impressive revamp of the original Tron universe; sequels don’t normally take close to 30 years to come out, and a lot has changed since 1982. Merely as a comparison of technology it was worthwhile to venture into The Grid for both films, though neither broke new ground. Keep on the lookout for the Michael Bay’s Transformers crossover : MegatronTron.