Total Lack of Recall: The Withnail and I Drinking Game 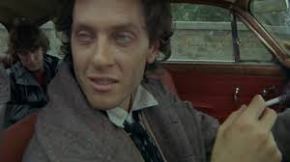 Film Outline: Withnail and I (1987) is the heartbreakingly comic tale of two failing actors and their ever spiralling descent into vagrancy and alcohol dependency. Richard E. Grant plays would-be-Hamlet Withnail with wide eyed tenacity, while Paul McGann observes and narrates as his slightly more ‘together’ flat mate and friend.

Rules: Every time Withnail consumes alcohol – which is most of the time – the players must drink what he drinks along with him. You don’t have to knock back the exact amount because you wouldn’t last 15 minutes, just use your discretion to decide how many fingers or shots will have to be chugged. 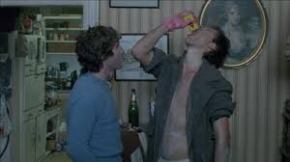 The Report: Including myself, three people participated in the game, although our loutish behaviour was pronounced somewhat by the presence of three sober individuals that were attempting to watch the film too. Being amateurs, there was a great deal of pausing and chatter, especially when the film had be stopped so that everyone could decide/complain about how much gin was to be drank.

Together, we drank: A bottle of rosé, a bottle of ‘sherry’ (white wine really), five or six pints of cider, twelve pints of lager, half of a 35cl bottle of gin, three quarters of a 35cl whiskey bottle and three shots of vinegar.

The Damage:  I passed out and enjoyed a sweaty, sleepless three day hangover. Meanwhile, the two other combatants threw up for several hours, until they were choking on their very souls. There was also some alcohol spillage.