Plot: While hearing confession, a good natured priest (Gleeson) is told he is going to be murdered for the crimes of the Catholic Church by an unseen member of his small town parish.

Religion, eh? Calvary is the darkly comic follow up to duo John Michael McDonagh and Brendan Gleeson’s The Guard, though it swerves far more drastically into the ‘dark’ side than its predecessor. A tale of sin, forgiveness and futility, Calvary boasts an outstanding turn from Gleeson and a moral perspective that may leave you floundering like a child at first communion.

An ageing priest in a coastal town, Father James (Brendan Gleeson) carries a heavier cross than any man should have to bear. To aggravate the misery caused by his simpering live-in Deacon, his daughter’s (yeah, he was married once) attempted suicide and his dealings with the cannibals and rapists that constitute his flock, the good father is then confidently informed that he will be murdered on the Sunday after next. Anxiety builds as F. James attempts to work out which one of his clergy made the confessional box threat. ‘Killing a priest on a Sunday. That’ll be a good one.’

Calvary tackles the heavy stuff from scene one, addressing the thousand-year dictatorship of the Catholic Church and condensing characters into caricatures (the wife beater, the racist, the great whore) of moral degradation to make what’s left of Father James’ life a constant trial. Religion gets a good old hiding, and cynicism is the integrity-annihilating hero of the day. Tension rises in sadistically slow increments as, in a cunning reversal of the Agatha Christie and Hitchcock whodunnits, everyone tries to work out who’ll do the deed. As Calvary wrestles with the enormity of evil in the world and the randomness of everyday life, another question comes into play: Does it even matter who’s going to do it? 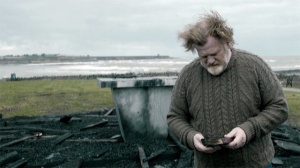 The film is set amongst the noble mountain ranges and wind-furrowed fields of County Sligo, home of W.B Yeats and – according to McDonagh at least – a population of unrepentant sociopaths. The director’s framing and lighting is as picturesque as can be, even more so than the charcoal landscapes by the local altar boy, who’s just about the only innocent party in the whole damned congregation. However pretty the backdrop, (lookin’ good, Knocknarea!) it’s still hard to fathom the many scenes which open on our parish leader strolling with one of his sheep clad wolves in the middle of godforsaken nowhere as though they’ve trudged silently over marsh and meadow to begin their conversation about fate on a remote melancholic beachhead.

Brendan Gleeson is the gallant champion of the film, and he’s held up by excellent supporting appearances from Kelly Reilley and a money obsessed Dylan Moran; ‘Have you seen this pen?! It’s expensive.’ Chris O’ Dowd features too; coupled with his role in The Double he’s enjoying a fantastic week on screen. Should you go into Calvary bleary eyed and in hope of belly laughs then you’ll be left in tatters; McDonagh’s screenplay cuts as deep as a film exposing horrendous power abuse should, and you’ll have some pondering to do once the credits roll. Body of Christ? More like body of Cripes!