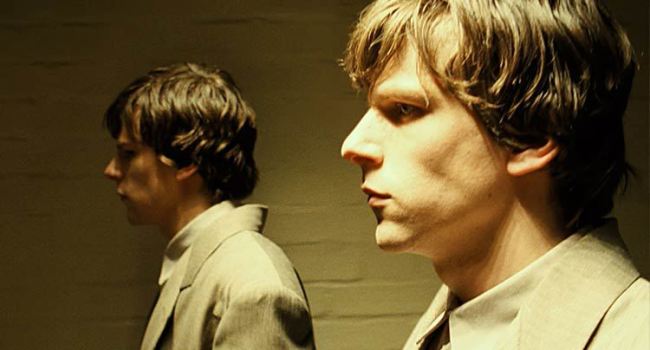 Take you, with your worries, your bad habits, your sad memories, and then go to face to face with a physical twin completely devoid of your defects and channelling the charisma and tenacity of Paul Newman spliced with a honey badger. This is exactly what happens to poor Jesse Eisenberg in The Double, a fresh adaptation of a Dostoevsky poem from the wickedly articulate Richard Ayoade.

As The Double opens on a floor cramped with cubicles, the brains of Brazil fans may let out a familiar sigh, but before Jesse Eisenberg’s lonesome lackey takes his stool Ayoade manages to stamp his own form of despairing wit on the classic Orwellian set-up. Simon James (Eisenberg) is your typical, under-appreciated number cruncher; he’s talented yet he goes unnoticed, as do his affections for the office printer girl, Hannah (Mia Wasikowska). She finally speaks to Simon after a neighbour decides to drop off a ledge, and for once in his life things are beginning to look less eternally bleak. Following the Social Faux Pas Handbook to the letter, Simon struggles to make an impression, and before he can assert himself an identical counterpart named James Simon materialises to steal his job, his love, his life… even his mum! 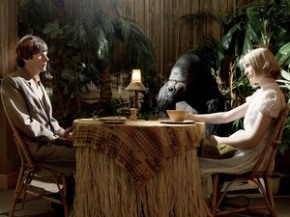 The Double is depressing – in a good way. Suicide is top of the agenda but, despite the overbearing sadness of the piece, there is a wacky sensibility to the script -and especially to Ayoade’s camera work – which makes the whole thing unbearably funny; laugh so you don’t cry, as they say. One recurring element really encapsulates this: After a thankless day of soul-destroying toil, Simon will flick on the cube to stare bleakly at a grainy, gun wielding space cowboy (Paddy Considine) traipsing about in a world of golden foil and multi-angle slow-mo shots. The satire of The Double is excellent, distilling all of Ayoade’s intellect – barely glimpsed in shows The Mighty Boosh and the IT Crowd – into one glorious societal spoof.

The casting is key to The Double’s charms. After Stoker, Only Lovers Left Alive and now this, Mia Wasikowska has overtaken Saoirse Ronan as the best young actress in the business; she’s lovely, irrespective of her shonky Americaustralian accent. As for Eisenberg: Can you give two best actor of the month awards for one performance? In alter-ego James Simon, the ex-Social Networker brings something new and threatening to the film, in stark contrast to the quivering protagonist,  whom he plays with equal conviction.

Rest assured, this is the best film to have a single actor playing twins in polar opposition since Double Impact. That was a joke, because Double Impact is not a good film, whereas The Double is, exceedingly so. Lastly, a word on the music selection: Amazing.