Plot: When the head of the Altman family passes away, his wife (Jane Fonda) brings together her disparate offspring to sit Shiva, a traditional week-long Jewish mourning process which requires them to all stay in one room down and argue about the origins of their high school nicknames. 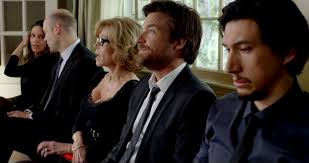 Chief janitor of the Night at the Museum franchise Shawn Levy has never been one for subtlety. Between skeletal t-rexes running about Central Park and casting Steve Martin as Inspector Clueseua in the Pink Panther, his career has been one big family-friendly joke. A successful one, undeniably, but one which up until now has been entirely asinine. With his new emotional comedy This is Where I Leave You, the trend continues. As are the ex-girlfriends of supporting (but best) character Phillip Altman (Adam Driver) referred to in the script, dysfunctional family dramas are ‘a dime a dozen’ – make that a baker’s dozen then, because this brings nothing new to the moulding batch of Apatow-aspiring ensemble dramas that have violated cinema complexes in recent times.

Jason Bateman (whose work in Arrested Development will never be topped) takes on the role of radio-show producer Judd Altman, a recently bereaved son/recently cuckolded husband/ extremely bitter sibling who returns to his family home in the wake of his father’s death. Nest mother Hillary Altman (Jane Fonda), the resilient matriarch and now head of the family, gathers all her children – among them also are Tina Fey, Adam Driver and Corey Stoll – under her wing to sit the sacred Judaic ritual of Shiva, which was apparently the dying wish of her atheistic partner. Shiva involves seven days of sitting in a house together; it literally ‘translates as seven’, and should you go and see this film you’ll be counting down the days even more excitedly than the malnourished stereotypes which barely pass as characters in this film.

This is Where I Leave You’s two biggest running jokes are so weak they’d struggle to see through a 1k charity fun-run: one is that Jane Fonda’s wrinkly house wife has recently undergone a boob-job, which is obviously crazy-hilarious because she’s not of an age that one typically pays for such an operation – not to mention, mega-awks for her fully grown children AM I RIGHT?; the second gag – pulled out of the kippah more times than should be legal – involves a rabbi that really dislikes being called boner by his old school mates. Boner. End of review.