Ever wonder why witches, Frankensteins, plague sufferers and Jeeper Creepers must be burnt to a crisp so as to finally die? Yes, besides crisps being absolutely delicious, it’s because you have to irrevocably destroy the bone structure that lurks within. That’s probably why the skeleton is the scariest monster on screen, the scariest monster of all: because you ARE a skeleton. It doesn’t matter how far you run; it makes no difference where you hide; you can’t take drunk alcohol to melt it awayways; you are a skeleton, and one of these days it will burst from the pathetic fleshy pod you call a body, dancing as it does, to join the legions of bony demons that populate the underworld and take rest spas in your blood. It will happen. Unless you get blown up or cremated or what not. Happy All Hallows Evening to you.

Jason and his lagernauts are master con artists – they fleece the pockets of Greece from coast to coast – and, by the third act, seem to be well on their way to eternal glory. All they have to do is find a shiny sheep skin, but when these skeletons (which look suspiciously like the undead warriors from Oblivion) pop up their mission seems to be in grave danger. Luckily they were apprehended by Harryhausen, Olympian god of stop-motion animation, and Jason was saved a serious ribbing.

Christian Bale has a reputation for flying of the handle, and it’s not hard to see why; between threatening to kick the donkeys of light technicians on set, assaulting his sister, and liking Huey Lewis and the News, Mr Bat(e)man is a thoroughly chilling individual. What we should all really be scared of, however, is his devilish ability to swap from his human form to that that of his ghostly counterpart and back again, without actually dying. Why he chose to play the caped crusader is a mystery – he would have been much better served in the Amazing Spine-der-man. 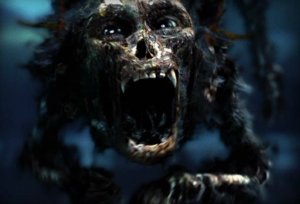 What Kiera Knightley thought was an adorably cute pet monkey turns out, in the cold light of the full moon, to be an ugly – not to mention unconscionably cheeky – bag of baboones. With great big pointy teeth. Shiver me limbers!

7.Jack Skellington – The Nightmare Before Christmas (1993)

It was hard to marrow down this list, but Jack Skellington simply had to be on it – the man is a bone-a-fide icon. His rictus grin is the face that launched a thousand ships’worth of pumpkins that will have him brutally carved into them this Halloween, and every other Halloween thereafter, until WWVI blows us all sky high.

‘I didn’t know nuffink about no skellintins!’ – Village idiot Nick Frost got the wool pulled over his sockets in a big way by the NWA crew of Sandford village. Simon Pegg’s overzealous police officer unveils the whole truth when he enters the local crypt, but of all the hapless skeletal victims the human statue is the most blood-curdling of all, because even in death he looks… exactly… the… same. Such a pro. 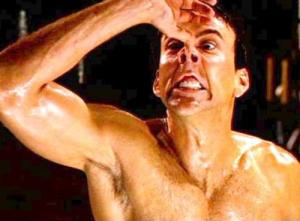 If Jon Hamm, Mark Hammill, Jason Statham, and M.C Hammer all had individual children with Linda Hamilton, and those offspring formed an acting troupe who put on a rendition of Animal Farm in a pork processing factory, the performing still wouldn’t be as hammy as Nicholas Cage’s turn in Ghost Rider.

‘The way is shut. It was made by those who are Dead, and the Dead keep it, until the time comes. The way is shut.’ Not very reliable locksmiths, the Dead, but fairly handy in a pinch. Or a full scale twenty-five minute CGI battle, for that matter. 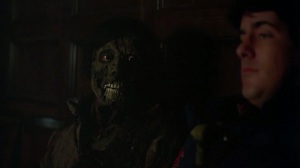 Alfred Hitchcock managed to elbow a cameo into every film he made – in Psycho he can be seen skullking around in the opening scene – but even more impressive than his part-time acting skills was his rigor(mortis)-ously prepared jump scares. The big reveal at the end of his most legendary film will have audiences burying their heads in their hands and screaming black-and-white murder. Hmm. I seem to have run out of puns and enthusiasm.

WARNING! SPOOK LEVELS MAXIMISED. KEEP HANDS INSIDE OF WRIST SOCKETS AT ALL TIMES

Thanks to all who read this. Happy Halloween, hope you trick a lot of people into giving you drugs or whatever.