The following movie pitch for the film China Girls (working title; alternatives include Eyes of Blue and Loud as Thunder) remains very much on the market, and anyone interested should contact me via Twitter @MovieQuibble or on LinkedIn (Tom Bruce – Movie Quibble CEO) with your full name and links to past examples of your film work either as producer or director. All we really need is funding, most of which will go the motion picture corporations from whose film properties we will need to lease extensive clips, to the high profile cast*, and the agents of said cast.

*Casting subject to revision, depending on availability.

Script outline: Ensemble cast anthology film shot as a series of vignettes in which audiences comprised of famous showbiz types view films in a privately owned boutique cinema showing a mixture of popular mainstream releases, cult favourites, Hollywood Popcorn Classics, and independent foreign pictures. The cinema owner, who is also the projectionist, edits Iggy Pop’s song China Girl from the album The Idiot into any and all films set in South East Asia, at extremely inappropriate places, with no regard for the geographical, cultural, or historical idiosyncrasies of the sub-continent’s different nations.

This cinematic psycho’s perverse choice of music is deeply disrespectful given the context, and ruinous to the films’ emotional power – to say nothing of the major copyright infringements. The effects of his depraved and tireless audio meddling would be almost comical, if it wasn’t for the obvious sexual pleasure he derives from the outrage experienced by his patrons, whom he records using night-vision cameras he has placed below the screen to train on their horrified faces. The man is sick, and he needs to be stopped.

He doesn’t stop there, though. No film featuring a fully non-Caucasian cast is safe from his twisted music-altering machinations, and as he spirals out of control he incorporates the offensive Asian xylophone-centric 1970s pop single China Girl into ever more obscure and non-related genres of film, including Science Fiction and Disney cartoons about Native American cultural genocide.

As if all this weren’t enough, he fervently denies David Bowie’s involvement in co-writing, producing, and playing saxophone on the original China Girl recording performed by Iggy Pop aka James Newell Osterberg Jnr. This bent musical historical revisionism extends to the post-movie credits, wherein the cinema owner/projectionist has hastily pasted the details of his favourite song amongst the rest of each respective film’s soundtrack listings.

Sample Edits: Below are drafts of what the final studio cuts could look like. Owing to a current lack of funding we have not been able to make use of professional software tools required to isolate and excise the soundtrack backing and replace it with the upbeat tragi-comic love song China Girl without also blocking out the whole spectrum of sound. These clips are trial versions, and should be treated as such. Please full screen each linked video for immersive cinematic impact.

The poignant end scene from Oliver Stone’s bold Vietnam war film Platoon, in which Charlie Sheen’s character laments the loss of his comrades, his youth, and his innocence, gets irreparably tarnished by the vocals of a heavily intoxicated Iggy Pop crooning about an unrequited passion of for a young lady of Chinese birth.

The scariest moment of Japanese psychological horror The Grudge is ruined by Iggy Pop’s China Girl.

Matthew Modine and company stand around watching a young Vietnamese guerrilla foot soldier breathe her last. As they consider the twisted irony in losing several marines to her rifle while using every ounce of firepower at their disposal to catch her, only to discover that their hidden sniper is but a small female child, she looks up with a face wrought with pain and begs them to shoot her. The pan-Asian harmonicum of Iggy Pop’s China Girl kicks into action, making a farce of this monumental metaphor for Vietnam’s Resistance War Against America.

A fleet of helicopters descends upon a Vietcong controlled coastal village, decimating it in an awesome hail of missiles and machine gun fire set to the raw industrial rock drum beats and guitar riffs of Iggy Pop’s China Girl, recorded in France in 1977.

Woo Jin recalls the heartbreaking end to the taboo love affair that altered his life forever, to the tune of Iggy Pop’s foot tapping pop hit China Girl. An additional use of China Girl could come in at the moment when Korean-born main character Dae-su Oh discovers that he has been unwittingly having sex with his estranged daughter, to hilarious effect.

The most terrifying scene of Japanese psychological horror The Ring is spoiled by Iggy Pop’s China Girl.

Tom Cruise implements textbook cultural appropriation, going from crude American dog to skilled ninja warrior master in a matter of months. But he couldn’t have done it without a strong woman by his side, that woman being the widow of the man whom he killed before he was taken prisoner by this elite sect of the Japanese shogun military. Here we see their palpable emotions, painfully restrained, as Cruise braces himself for certain death. At the same time Iggy Pop’s China Girl utterly and permanently destroys this beautiful, delicate moment of cinema magic.

As the wistful lyrics of China Girl stream towards you, Sam Worthington’s disabled human marine has sex with Zoe Saldana’s eight foot tall blue hominid Na’vi alien woman through the use of virtual reality mind control from an incubator in a shed somewhere.

Pocahontas (1995) – Every Musical Number, e.g: Just Around the Riverbend

A slew of catchy oriental-themed Disney tracks are cut out and in their place is spliced the equally catchy (and for once, actually appropriate in terms of geography) song China Girl written and performed by Jimmy Osterberg aka Iggy Pop, from 1977. Mulan fans are not happy, for some reason.

And also including other timeless film scene mashups like…

This could be the new Cinema Paradiso, so don’t let it fall through the cracks. BBC Films, BFI, and Film 4 are all chasing me down as you read so you’d better pounce soon if you want a slice of the action. Estimated budget £85 million. Skype me. 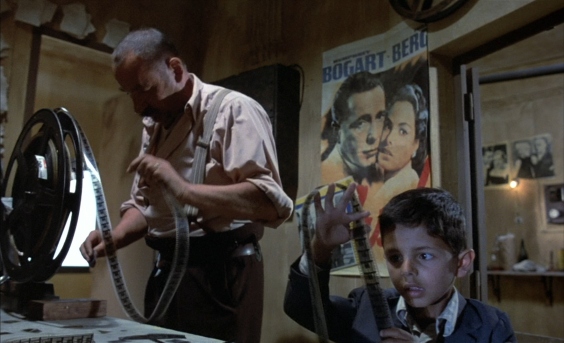